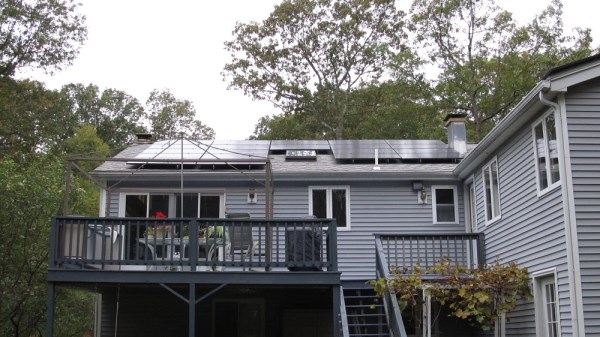 (Photo of SolarFlair installation in Ashland)

After SolarFlair moved to Ashland from Framingham earlier this year, the solar energy company is kicking off its Solarize Ashland this month.

In partnership with the Sustainability Committee, SolarFlair announced at Wednesday's selectmen meeting that it wants to start a grass-roots movement to get Ashland residents and local businesses to install solar panels.

Instead of going door to door, SolarFlair is using the town's support to get customers in Ashland.

SolarFlair Owner and President Matt Arner challenged selectmen to lead by example and get solar panels in their homes.

“We’re very much committed to MetroWest,” he said.

While SolarFlair has the town's support, it doesn't have a contract with the town, according to Town Manager Tony Schiavi.

The company is growing quickly. It has 35 employees with plans to hire eight to 10 new people this year.

To kick off Solarize Ashland, SolarFlair is giving a $500 automatic rebate to the first 20 people who sign up for the program, according to Dan Greenwood, SolarFlair’s vice president of business development.

The more people sign up, the more the cost will decrease, said Greenwood.

Residents can get more information about Solarize Ashland at solarflair.com. The company is having a ribbon-cutting ceremony open to the public on May 15 at 5 p.m.

In another attempt to bring solar to Ashland, Town Meeting this week is voting on terms for a solar overlay district in residential areas.

If approved, the warrant article will put in safety measures and create a special permitting process for large, ground mounted solar arrays. The article will also give the Planning Board the power to look beyond technical specifications and decide whether solar installations are appropriate for particular neighborhood.

Town Meeting is on May 7 at 7 p.m. at the Ashland High School auditorium.